Domenick Venezia is a nearly lifelong resident of beautiful, rugged Washington State. His first three novels, Liberator Legacy, Minidoka Legacy, and Suriname Legacy, took three of the top ten Semifinalist positions in the 2017 Clive Cussler Collector’s Society Adventure Writer’s Competition. Minidoka Legacy went on to be selected as a top-three Finalist. He has been a judge for the competition since. All three novels were selected as 2018 Pirate’s Alley Faulkner Society Competition Semifinalists, and Angel’s Salvation, book four in the Linc Malloy series, was selected as a 2019 Pirate’s Alley Faulkner Society Competition Finalist. In addition, Angel’s Salvation was honored by the 2019 Chanticleer Book Reviews Somerset Awards Long List, and Liberator Legacy, and Suriname Legacy by the 2019 Chanticleer Book Reviews Somerset Awards Short List. His medical thriller, Do No Harm, was named as a finalist for the 2020 Chanticleer Book Reviews Global Thrillers Award and the Pacific Northwest Writers’ Association Award.

Most recently, The Linc Malloy Legacies were named a 2021 Chanticleer Fiction Series Finalist in the Global Thriller Awards for High Stakes Fiction. Winner to be announced 25 June 2022.

Domenick’s childhood was spent roaming the local mountains and forests, reading How & Why Wonder Books, and to his parents’ chagrin, filling his room with rocks, bugs, plants, and fossils. He built tree forts and dug holes to China. He kept a pet bullsnake and a chipmunk. Mostly, this kept him out of trouble. He learned much, made mistakes, and got lucky. He did too much of this, too little of that, and has the scars to prove it.

A love of books, an insatiable hunger to learn, and a restless spirit, led to a dozen different jobs including fast food, fruit picking both sides of the Cascade Mountains, Oregon ranch hand, book buyer, taxi driver, carpenter, and twice a college graduate. Fascinated by the intersection of biology and computation, he served over two decades as V.P. and Chief Information Officer in the rough and tumble science of a pioneering, iconic, Seattle biotechnology company.

Throughout it all was a compulsion to put thoughts and feelings into words—to tell stories. Along the way he became a fisherman, mechanic, scuba diver, photographer, beekeeper, homebrewer, competitive shooter, pilot, coffee roaster, and kayak angler. Domenick’s broad experience, local knowledge, meticulous research, and ranging mind brings authenticity and accuracy, emotion and action to his storytelling.

When not writing he may be found piloting his small plane above the Pacific Northwest and beyond, salmon fishing from a yellow Tupperware kayak, homebrewing, and roasting coffee. He stokes an occasional cigar, tips fine bourbons, and enjoys a robust stout. 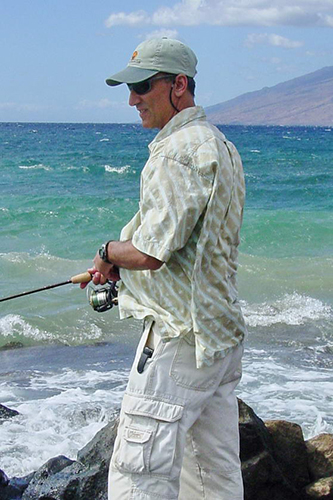