OncoLogic CEO Dr. Bryce Blanchard’s daughter, Katie, lay dying, stricken with the same merciless cancer that had taken her mother years before. The small plastic infusion bag in his jacket pocket was Katie’s last hope. Experimental and unproven, it could save her or steal what little time she had remaining.

The law says, he must do nothing.
But when is doing nothing, doing harm?

What if it was your child?

What started for Bryce Blanchard as a desperate act to save his daughter, spirals wildly out of control. One despairing patient leads to another and another. These seeming miracles bring intense media coverage.

A local Seattle billionaire will pay anything to save his son.

With his army of lawyers, a big-pharma CEO schemes to acquire the secret cure. To commercialize it and offer it to the world? Or to bury it and protect their corporate profits?

Must Bryce stand by and watch patients needlessly suffer and die?
Should he risk millions of future lives by today illegally saving a few?

What does it mean to do no harm?

On the run, besieged by media, desperate patients and parents, and doggedly pursued by a relentless big-pharma CEO, Bryce is about to come clean when an unforeseen side effect changes everything.

His daughter lay dying . . .
He fingered the small plastic infusion bag in his jacket pocket. Its two ounces of fluid were Katie’s last hope. Only two months before, Eve had burst into his office with the news, and here he was about to dose Katie with something that could save her or steal what little time she had remaining.

A terrible price . . .
Eve took a deep breath. “The first rat died, and the rest are not far behind.” She dropped her head. “The treatment cured the patients, but it did something else.”

Corporate greed . . .
“I could anonymously tip off the FDA,” said SMB CEO Selvaggio. “If you think our corporate audit is intrusive, wait for the FDA’s armed agents to pay you a visit. It’s quite simple,” he smirked, “You cure me, and SMB acquires OncoLogic.”

An unwilling ally . . .
Selvaggio screamed. He lashed out behind him catching Eve with a sweeping blow. She stumbled into the overturned couch and went down. He yanked out the syringe sticking from the back of his thigh. The plunger was fully depressed, its needle bent. 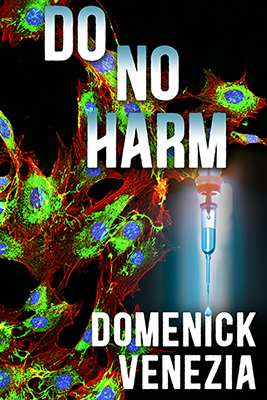